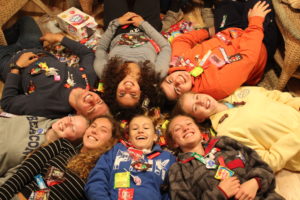 Tonight was the perfect night for the AWACs to sort candy! Under the full moon, the they snuck out of their cabins to find the sweet treats. Each piece of candy was personally inspected by one of our AWACs, making sure that are fresh, still in its wrapper, and ready for campers to eat!

The AWACs debated the best candy to drop from the plane. It was decided that Tootsie Pops were the most aerodynamic candy, followed by the Jolly Ranchers.

After sorting and inspecting the candy, the AWACs laid on top of a pile to pose for some photos. The photos mysteriously appeared around camp soon shortly after. So spooky!!!

Now, it is time to let the candy drop conspiracies begin. Do the AWACs know when it is? Or the PDs? And who is going to be in the plane???