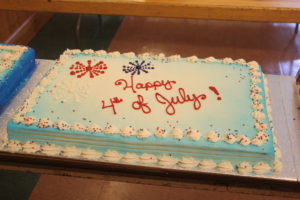 Gooooooooooooood morning! Humming Bird here! Up first, an update on yesterday! We enjoyed some YUMMY cake (check out pictures below!), and then we all headed to the rec hall or the foothills dance studio to watch our movies! We had Pan in the foothills, and Inside Out in the rec hall! It was all very emotional and lovely!

Now, on this beautiful day-after-Independence-Day, I am here to chat with you about something we do every day, but which doesn’t get mentioned too much on our blog…. INTEREST GROUPS! What on earth are interest groups, Humming Bird?? Well, I will tell you! Interest groups are not our classes– they take place during our fifth period, after snack of course. Counselors announce during Morning Meeting what activities they’ll be running, and when fifth period comes, campers can mozy around between activities, or they can hang out on their own for the hour and a half before Evening Meeting.

What kinds of activities are there? I’m getting there! I’m getting there! We have your typical letter writing or friendship bracelet making, there’s always basketball, and campers can play with the animals (did you hear about batch 2 of baby bunnies??). But we also have some ~cRaZiEr AcTiViTiEs~ like spooning the tree (where you have to throw spoons at a tree until one gets stuck in the branches), singing love songs to Dexter, and revealing candy drop conspiracies!!! Normally campers can go swimming at the pool, but unfortunately today the pool (FUN!) is closed 🙁

BUT THE LAKE (FUNNER!) IS OPEN!!! So today, and today only, we will have interest group activities at the lake, like frog catching and cards and such! It’s going to be a beautiful, sunny time… except I’ve been told there’s a chance of schvitz…. of candy schvitz, to be exact… Hm… We shall see! If you want to see how interest groups period works, check out this video that our counselor, Rob, made. He’s been doing some REALLY cool stuff with video this summer, including introducing a green screen! We’ll get to see some of his work at the end of the session!

On a totally different note, we’ve named our dragon! What dragon, Humming Bird? Wow you have a lot of questions this morning! Well, we have a HUGE dragon on the ceiling of our dining hall. It watches over us as we eat our food, and absorbs some of the noises we make as we munch! Every few years we as a camp have the daunting task of naming our beloved dragon, and folks, the year has come. Wombles has been heading up Operation Dragon Name, and this morning we took the final vote and named our friend Sparky. One past name we had– chosen by our current PD, Grace, when she was a camper– was Rock-On Party-On Drag-On (geddit??) Well… we’re excited about Sparky’s new name this year. There was a bit of controversy regarding the name, so you may hear campers referring to the dragon by other names, but we know that at least Wombles will be waving hello to Sparky at lunch today! What would you name the dragon? Let us know!!

I’m going to go chat with Sparky now about it’s own preferred name. You know, birds of a feather flock together…. Rather– creatures of a feather? Well we both have wings, anyway! Anyway, I’m off to interview Sparky! 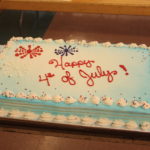 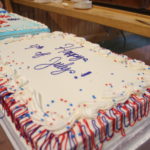