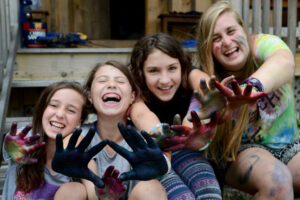 Seasons greetings, campy folks! Hummingbird here! We’re certainly far from summer now, huh? There’s snow on the ground, and the air is a’hum with carols! Golly, the holidays are comin’ up fast and I don’t even have my gifts ready yet! I want to give something I made from the heart, but I just don’t know what I could make…. Let’s see what our Art Poobah, Elise, is up to. She’s so creative, maybe she’ll have an idea for a crafty holiday gift! Elise has been at camp for 5 summers, and she’s headed up all the art programming at camp, from tie dye to drawing, photography to print making, and everything in between! You may recognize her by the crocks she wears, or the tie dye that’s always staining her hands! And if that doesn’t tip you off, you may know her as the counselor who takes all the pictures around camp and sings Jingle Bells in July! Let’s see what she’s up to!

Hummingbird: Howdy Elise! I see you’re still wearing your famous mis-matched crocks! Do you have a favorite color combination?

Elise: Yes! I have one green one, and one yellow one with flowers. I like to switch the back straps so they’re opposite! (But mostly I just don’t really like shoes at all. Shhh that’s not allowed at camp, don’t tell anyone!)

Hummingbird: You get to be behind the scenes and up close and personal at every camp event to take pictures! Many of your beautiful pictures are posted right here on this very blog! What is your favorite camp program to photograph?

Elise: My favorite camp thing to photograph is baby food! It’s exciting because I never know it’s gonna happen until right before it does, and it’s SO much fun to take pictures of all the crazy grossed out expressions from all the campers and AWACs and counsellors that are watching their friends eat disgusting food! There’s nothing like capturing the face of a kid eating mashed up ham and peas on a big spoon! Mmmmm! Closely followed by Kim and Reggie, obviously. Although, as much as I love taking photos of people “Trampin,” I’d rather leave my camera in the cabin and join in.… I do my best to do both!

Hummingbird: Camp built a brand new photo studio just last year! Can you tell us about the process of building the studio? Was there anything special you made sure was part of the building?

Elise: Omg the new photo studio is my dream come true! To be honest, I wasn’t really a part of the actual building. That was primarily Carmi and Tim’s beautiful work. I was involved in looking over the floor plan before it actually got built. I remember making sure there was going to be a closet for developing the film, and making sure there would be a sink in both the studio, and also the classroom.

It was such a relief to actually have a classroom space with a table to work at too, for the times that we’re not actually in the dark!  Our classroom in the old photo studio was literally the health lodge porch (ouch!) And as much as I love those mountain biking classes, I definitely don’t miss the chaos of trying to teach a photography class amongst bikers.

Hummingbird: You have a unique relationship with the lake fish. Is it true that when campers go up to Pinegrove twice a session the fish sing along with the camp songs all the way from the lake?

Elise: They obviously sing along! How can you NOT sing along to Pinegrove songs?? I bet their favorite is “the jellyfish”. …although it must be frustrating for them, they have no knees to put together, and I’m not really sure if fish can squish their faces? Let me know you guys, it certainly won’t be me asking them!

Hummingbird: What is your favorite art class you’ve ever taught at camp?

Elise: HA!! Oh wow that’s an impossible question to answer. I think it’s so much fun to teach screen printing and photography especially, because I spent all of my college years making my own work in the darkroom and the print studio. Being able to teach what I love to campers who are really interested in learning about those things makes me feel really good. And honestly, I’ve learned more about art from teaching it to kids than I think I learned in art school! So many cool ideas, and different ways of doing things.

Summer of 2015 I taught a class that was supposed to be making beads out of polymer clay. I brought a little old toaster oven and a bunch of Sculpey clay into the foothills dance studio. The majority of campers that signed up were in French Quarter together at the time, and everyone was friends, which is always fun. One day while we were making beads, someone commented on the toaster oven we were using to bake the clay, and pretty soon everyone was talking about how much they wished we could have toast while we were making our beads! I thought this was a pretty good idea too, so I started grabbing a couple extra pieces of bread at breakfast, and some packs of butter and we would have toast parties every day while we were making stuff out of clay! I brought my old iPod to class and one day the song “Ophelia” by the Lumineers came on. All the campers in the class decided it was the only thing they wanted to listen to, so by the end of the 2 weeks the class had gone from regular clay beads to toast parties, and sing-screaming “Ophelia” for an hour every single day. I loved it, it was hilarious and actually so fun! It always cracks me up when classes transform into some crazy thing that’s so far from where it started. That’s the beauty of camp for ya! Never a dull moment. Shout out to my 2015 toast class!! I’ll always remember you. …you know who you are. 🙂

Hummingbird: What are some creative crafts you’ve seen campers make over the years?

Oooh boy, people around here are pretty crafty! I love watching the crazy classes that art teachers come up with, and the wild creations that campers pull outta nowhere! From Rachel’s cardboard arcade class, to magic potions, paint balloons out of the treehouse, and loofa paintings during cabin nights. kitten toys, tie-dyed limbs, and faces drawn on water balloons… Everything is art. The possibilities are endless. Ya’ll are creative as heck, keep it up!

Elise: I’d probably have to say it’s a pretty close tie between the Buckhorn and the new darkroom! The darkroom is winning by a little bit right now, because it’s so new and beautiful! But I love being in both of those spaces… and it’s a good thing, because that’s where I spend the majority of my camp time! #tiedye4evr.

Hummingbird: It’s no camp secret that you LOVE the holiday season! Campers can see you sporting a santa hat and singing Jingle Bells around camp throughout the summer!! What do you love about this time of year, and how do you bring that spirit to camp during the warmer months?

Elise: My favorite holiday song is “The Christmas Waltz” by Frank Sinatra. The best line in the song is “It’s that time of year when the world falls in love.” Corny, I know. But also, it describes in a phrase exactly why I love the holiday season. No matter what you celebrate, or if you even celebrate a holiday at all, and whether you’re home, or far away… there’s something about this time of year that feels like people can find really good things happening just a little bit easier than usual. It’s just actual magic energy I think. There’s snow, (at least where I live!) and lights, and candles, and tons of sugar, and a lot of singing, and people helping each other out just a little bit harder. And those are all things that make me fall a little bit in love with everyone, and really glad to be alive in the world. Maybe that’s why I love camp so much! I think everyone at camp is REALLY good at being in the holiday spirit all year round. My kinda people. It’s all you guys that make it feel like mid December in late July. Thanks for your cheer!!! Merry happy everything, hope you’re all singing more than you’re speaking, and sneaking extra dessert!

Hummingbird: You’re famous for being able to sing (real words!!) with your mouth closed!!! Is there any secret to it? What’s your favorite song to sing inside your mouth, and have campers ever successfully sung along?

Hummingbird: For those of us who aren’t as holiday-ready as you are, do you have any craft projects we can have a fun time making and giving to loved ones?

Everyone loves a snow globe!! There are snow globes for all occasions! You can put whatever you want in them!! They make great gifts, and they’re basically a whole magic world you can hold in your hand and stare at whenever you want!

Here’s what ya need:
-baby oil
-a glass jar! (old glass peanut butter jars work, babyfood, jelly, salsa… really anything you can find that has minimal “stuff” on the sides.)
-glitter (not the super fine stuff- that will clump up. Look for the glitter with bigger pieces!)
-polymer clay (the kind that you bake in the oven)
-polymer clay glaze (clear glaze that makes it shiny-you can find it in the same isle as the clay usually)
-a hot glue gun and some hot glue sticks
-just a regular oven.
-optional: some acrylic paint, and a ribbon! 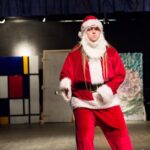 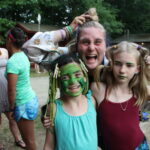 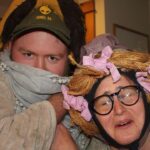 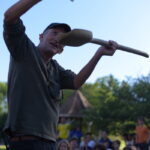 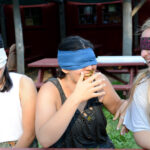 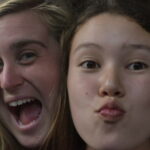 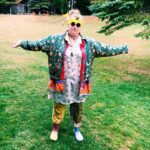 Dress in the dark day… her SECOND favorite holiday!!! 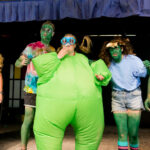 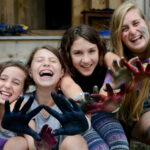 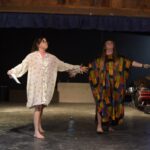 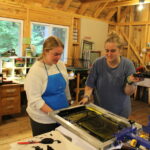 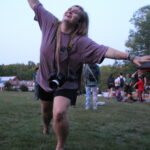 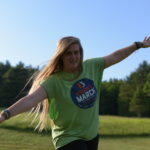