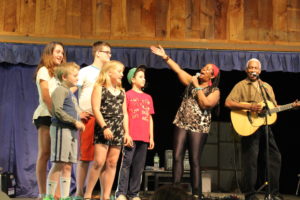 Good morning, good morning! It’s Cara B. with news from yesterday’s evening program and the fourth day of classes.

We slept the whole night through after a yummy Mexican dinner and lots of singing with Kim and Reggie. We sang many classic Kim and Reggie favorites, including Trampin’, Satchel Page, Solar Power, and my personal favorite, Them Bones Gonna Rise Again. Reggie offered some wisdom to our campers about their significant role in making positive changes in the world. He noted that though many people do not believe that kids can be involved in conversations about current events, that is certainly not the case. He reminded us that “children are not the future, children are the present.” How awesome is that? Luna and I are so grateful to HVC campers for all the good that they bring to our community here.

While we were on camp singing our hearts out, Hidden Valley Alive was off site also enjoying some music. Our arts teen program headed off to Portland to hear Fleet Foxes perform at Thompson’s Point. I heard they had an awesome night. It’s so nice to get off camp for a little while, especially to appreciate the arts in a cool outdoor venue.

This morning we awoke to my absolute favorite camp breakfast, pancakes! With everyone’s grins stained purple from blueberry sauce, we headed over for camp meeting in the Front Yard instead of the Backyard. Why is that you may ask? Some will tell you that this is a sure fire way to know that the Candy Drop is today. Others, (Candy Drop conspiracy traditionalists,) will tell you that the drop only occurs during evening meeting, so a morning meeting location change is irrelevant. Perhaps we moved to avoid having the sun in our eyes, but I doubt it. Things are getting pretty fishy as the session progresses. The Candy Drop could be any day now!

After meeting, we went our separate ways for the fourth day of classes. It’s hard to believe we’re already half way through this round of classes! Tonight, it will be time to get wild for the Zoo Dance! Luna and I can’t wait to see everyone’s animal inspired looks. For now, enjoy a few photos from Kim and Reggie and Alive at the Fleet Foxes concert. 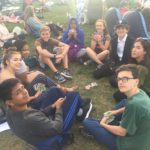 Alive at the Fleet Foxes concert! 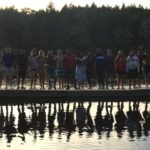 Alive at the lake! 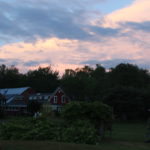 A beautiful sky after Kim and Reggie 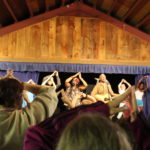 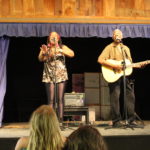 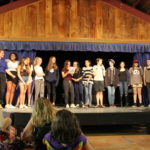 Halley’s Comet up on stage helping out Kim and Reggie 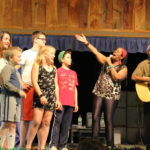 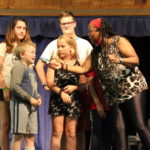 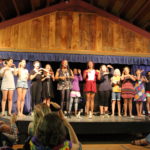 Camelot up on stage performing with Kim and Reggie