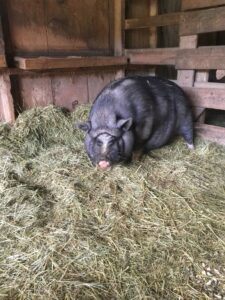 Attention campers and HVC families everywhere!! This is Mag-O-Llama, and I’m here to broadcast a VERY important announcement!

Hamilton the pig has announced that he is running against Otis in the HVC Presidential election that will be happening in August! If you have not yet watched Hamilton’s Presidential announcement, click the link here!

As a Llama living at HVC, I was very excited to here that someone was going to running against Otis in this presidential election. But now, I’m not exactly sure who I’m going to be voting for! I talked with Otis today, and he is feeling a lot of pressure knowing that he has competition, but he still feels very confident that he will win this race.

On the other hand, I also talked with Hamilton this afternoon to get his comments on the election. He is feeling ready to face Otis head on and is determined to win. Hamilton is looking to support the smaller animal’s needs throughout his presidency, and is sick of seeing the tall guys in charge.

Now, I’m off to go hear the press release on a possible debate between the two candidates coming soon.