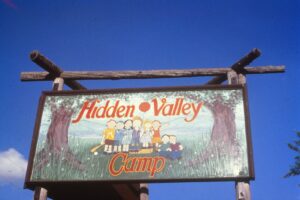 Helloooooooo, HVC! Hummingbird here, wrapped up in my favorite warm sweaters– layered for maximum heat conservation! Can you believe it’s December already?? There’s snow on the ground here in the Valley and the landscape of camp has shifted into winter mode, which has me wondering…. how else has camp shifted over time? To get the scoop on how camp has changed, I flew on over to the Office to ask Peter and Meg a few questions.

Hummingbird: What are your favorite places on camp, and have they always been here?

Meg Kassen: I love the hike through the Pinegrove down the back way to the lake, landing at the place of the sauna long ago for the tipi village campers, it was called the Sweet Lodge. Now it doesn’t exist. My other favorite walk is up the hill to the top of Ledge mountain then traverse down the slope to the incredible ledge mountain cliffs. These hikes are especially lovely when walking my dog (check out her Instagram account, @Nellieofthevalley!). The Pinegrove and trail to the lake along with the log cabin trail have been part of the camp for decades.

Peter Kassen: I spend the off season walking the trails and after storms, clearing fallen trees and branches so that they are clear for winter xc skiing, our favorite! Some have been here for a really long time, representing old roads that were traveled here in the 1800’s. Others we created over time.

Hummingbird: What was camp like when you first bought it? Were there llamas?

Peter Kassen: Yes there were llamas! Here are two truths and a lie about camp when we first bought it…
1. HVC was a smaller place as Deer Meadows was not part of camp yet. A family owned the area where the pool is, etc.
2. Some of the cabins had no bathrooms.
3. The lake was filled with chocolate.

Hummingbird: Wow I hope that third one was a truth! When did all the animals make their way into the Valley?

Peter Kassen: Our abundant wildlife began to come to this area about 15,000 years ago when the glaciers receded! All the birds, fish and mammals, insects, reptiles and amphibians were soon followed by the first humans, the indigenous people who became the Wabanaki confederacy. Many thousands of years later – in about 1980, the first llamas were brought here by the camp’s former owner Jay Stager. Horses were brought in around the same time, and Nellie the dog came to camp in 2018.

Hummingbird: How has the glass program come to be as big as it is now? Did campers always rush to sign up for glass beads??

Peter and Meg: For a while we only offered stained glass. Over the years, Dani has suggested new ways for campers to work in  glass.  First was mosaics, which was Dani’s brilliant idea to help us use up extra glass. Then we added glass fusing. Dani’s son Carmi (a longtime camper and counselor) then came along and helped us start glass beads and glass blowing, our two hot glass entrees!

Hummingbird: We’ve added several structures over the last few years… who builds everything when a new program area is added?

Hummingbird: What camp traditions have been around since you bought it, and what’s developed over time?

Meg Kassen: The pinegrove tradition was here at HVC when we got here. We decided to develop our own traditions over time to bring a camp culture around the program and environment here at camp, and make it a ceremony about the community unique to HVC.

Hummingbird: Has the food always been delicious??

Meg Kassen: Yes! Lillian has been at HVC longer than me and Peter. She and Chris have single handedly created a healthy camp diet. Lillian loves community and provides it to us through food. We get the love everyday!!

Hummingbird: How did the Farmhouse get all the way down from Tipi Hill to where it stands now?

Meg Kassen: OX pulled it along with logs that were underneath the house! They rolled it down the hill when the road was put into the valleys. The old town roads can still be seen at HVC, campers walk them everyday. One summer an elderly woman with two canes walked into camp from the ropes course. Her wish was to walk her old school route one more time… Peter and I gathered many of the older girls to hear her story while at interest groups, reflections of living on a farm, walking to the old school house which still stands in the center of Montville proved to be quite entertaining.

Pretty crazy to imagine all those changes that have happened over time in the Valley! Thanks, Peter and Meg, for keeping the history alive! Check out pictures of camp– do you think it looks more similar or different??

I’m off to find remnants of that chocolate lake…
Hummingbird! 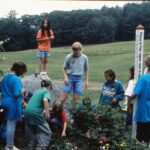 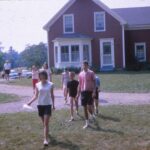 What class do you think this was?? 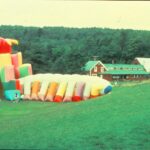 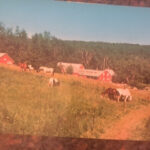 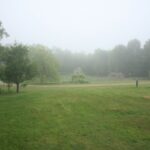 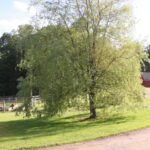 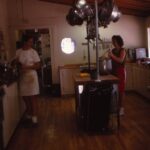 Did you know the Barn Kitchen used to be where Lillian prepared all the campers’ meals?? 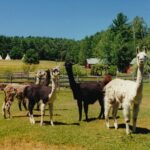 There have always been llamas! 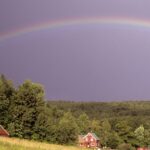 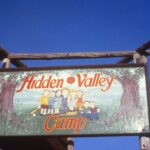 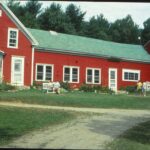 The Farmhouse used to be at the top of Tipi Hill! 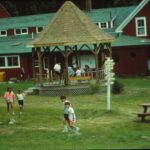 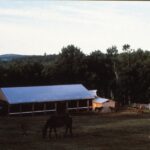 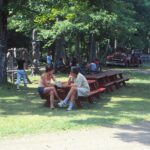