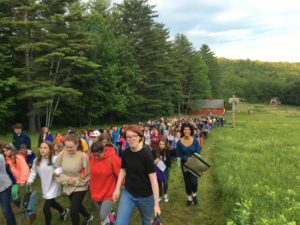 Walking up to Pinegrove!

Evening! It’s Luna Bug here with the final late night report on this whirlwind of an orientation day.

Olive Oyl talked about all the different things we had to do around camp (swim evals, class sign ups, etc) and I can happily report that they all got done. Wheel pottery and glass beads are full, as always, but there were also wild card hits like Burn Baby Burn, a class that seems to be centered around building things just to be destroyed. Further investigation on that class, later.

After the (as promised) delicious lunch, cabins settled into tours of camp, the last licks of unpacking, and working on pinegrove performances. Both the pool (FUN!) and the lake (FUNNER!) were open today for the swim evals, and even the ropes course was in use because HVA had a chance to climb the course before they set off for their first trip. Even though orientation day is a bit of an unusal day, camp really felt like it was in full swing today.

We had a great camp meeting, followed by a spectacular spaghetti and red sauce dinner. Raise your hand if you can’t get ENOUGH of Lillian’s delicious garlic bread! Okay, let’s just imagine that we all raised our hands while I daydream about that garlic bread…

After dinner we all headed to base of tipi hill for Opening Pinegrove. Our tipis counselors Emily and John led us up the hill in silence to the pine grove, where every camper and counselor sat around a big camp fire. One by one most of the cabins performed, from fun songs like Baby Shark to more heartfelt ones like Riptide. Overall it was a fantastic and amazing evening, and it was so cool to see each cabin as a unit stand in front of camp and perform!

A little schvitz tonight is going to clear up by tomorrow morning and give us a clear and warm first day of classes! My prediction for breakfast? Egg bar. Check back in tomorrow to see if I’m correct, and to get the update on all the goings on around camp. 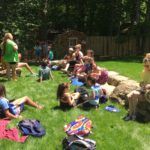 Waiting for photos to be taken at the health lodge (OUCH!) 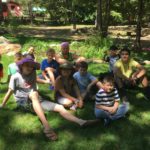 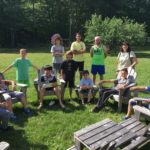 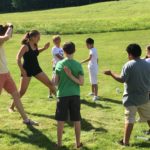 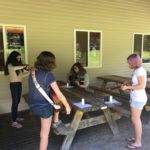 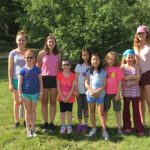 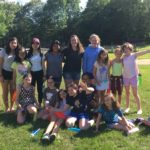 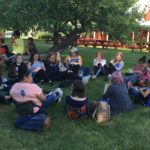 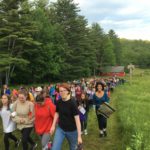 Walking up to Pinegrove! 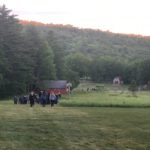 Walking back down from Pinegrove!